Following are videos of the Revolutionary War re-enactment held in Whitpain Township, Pennsylvania. They are made available in a variety of file formats. For more help with multimedia, please click here.

The Messenger In MPEG1 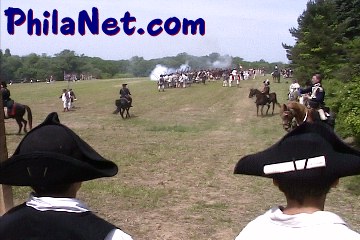 Roxborough During the Revolution

You can click here to view a roster of local recruits.

David Jones, the fighting parson of the Revolution once said; "No one could live on the Ridge from boyhood without becoming a sound American, because the Battle of Germantown and the March to Valley Forge would be sure to become part of his every being."

Roxborough Township in 1776 had a population of over 600 and 30 houses were along the Ridge Road. Only a few remain to tell their tale. The current Manayunk had not been thought of and was basically the wooded cliff-side of the Roxborough plantations, bordering the Schuylkill River. There were only two houses owned by the Levering Family (since demolished) in current Manayunk, along with two fisheries and "Righter's Ferry" crossing the Schuylkill into Bala Cynwyd.

90 Roxborough men, young and old, are documented as early Continental soldiers with many others joining as the War progressed. On October 3, 1775, Colonel Henry Hill wrote; "We have got around about Roxborough an active and well-disciplined company". A Mr. Paine who had once been in the British Army drilled the recruits. In 1777, Aaron Levering became Lieutenant Colonel of the 2nd Battalion of Philadelphia Associators for Germantown, Roxborough, Springfield and Bristol Townships.

On a journey from Philadelphia to Reading, George Washington noted the "sturdiness" of the stone farmhouses along Ridge Road and how they become "red" West of Norristown. That still falls true as the Roxborough houses are built with a gray "Wissahickon Schist" and the houses west of Norristown are built with a red fieldstone. George Washington stayed at Colonel Henry Hill's house on August 4th through 8th of 1777 and returned to Roxborough on several occasions. He brought 11,000 soldiers with him to Roxborough following the Battle of Brandywine. Many Continental soldiers from several states were in the area that summer and fall, arriving poorly clad and many barefoot. 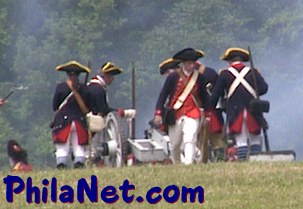 On September 25th, 1777, the British Army, in full red uniform marched toward Philadelphia down Ridge Road from Phoenixville (many marched down Germantown Avenue as well). Mary Levering, then 17 recalled; "First came three horsemen-the most splendid looking men-on noble prancing steed. Then followed artillery and light horse. At first they came along in intervals, but soon the road was crowded and thus they went nearly all day." The British camped in Germantown and there were a few skirmishes in Roxborough with no fatalities until the Battle of Germantown, which occurred on October 4th, when many American lives were lost. The British had occupied Philadelphia at the time of the battle.

A cold winter started in November. The 15,000 soldiers in the area who marched to Valley Forge had little on their feet and were poorly clothed from the British taking supplies. Blood marked the snow on Ridge Road where they had walked.

On December 19th, 18 Virginia Patriots seeking a place to sleep were put up in a barn belonging to the Wood Family at Ridge and Roxborough Avenues. Upon Morning, some British Dragoons discovered the soldiers, slaughtered them and set the barn on fire. In Roxborough Baptist Church Graveyard, a memorial monument remains in memory of those Virginia Patriots.

Another significant mark in Roxborough history, is when the British sought General Lafayette for capture. It was May 19, 1778. Lafayette brought with him 50 Native American Scouts to Ridge and Port Royal Avenues. General Gray marched up Ridge Road with about 50 Dragoons (Red Coats). The Natives were said to have scared off the Redcoats who then marched back to Philadelphia.

Many buildings remain in Roxborough that had either housed Continental soldiers or were built after the War by those who survived the battles of the Revolution and prospered. One should note when researching Roxborough during the Revolution; George Washington spelled Roxborough, "Roxboro".

Continue on to the Beginning of Manayunk