1826
After returning from England, Architect, William Strickland writes his ôReports on Canals, Railways, Roads, and Other Subjectsö, made to the Pennsylvania Society for the Promotion of Internal Improvement. The Schuylkill Navigation Company completes laying their Schuylkill Turnpike between Domino Lane in Roxborough and Montgomery County, previously known as The Pebble Road. Nathan Nathans builds his vacation home on a small section of land between the Schuylkill Turnpike and Towpath, close to the Schuylkill River.

1827
The Schuylkill Navigation Company maps it entire system between Schuylkill County PA, and Philadelphia, including prior land purchases for their towpath, as well as mapping their turnpike roads and bordering buildings. Visible on map is Nathan Nathansĺ country home.

1834
Horse-drawn passenger trains operate from 9th and Green Streets to Manayunk on a set of single tracks, while tracks are laid northwest to Norristown. Nathan Nathans sues the Philadelphia, Germantown and Norristown Railroad, for damages associated with laying tracks in front of John Wiseĺs house.

1835
The Norristown Branch is completed and passenger trains make their way to Norristown. Nathan Nathans loses lawsuit to Railroad and John Wisesĺs house and property are sold to Henry Croskey, local Lumber Merchant and Passenger Railway Enthusiast. Mr. Croskey creates a runoff stream leading to the Schuylkill River on his property during his lumbering process and names it ôGreen Tree Runö. He also builds an access road between the Ridge Turnpike in Upper Roxborough and the Schuylkill Turnpike and names it ôGreen Tree Laneö. He names his newly acquired house by the Railroad, ôGreen Tree Stationö, which he facilitates for passenger service and freight service for his lumbering business, while using the Schuylkill Navigation Company for lumber transport as well. At Green Tree Station, Mr. Croskey houses Schuylkill Navigation Company workers overnight, who load large shipments of lumber onto barges, making it a ômixed useö building.

1836
Engineer, Henry Campbell designs and sells steam Engines to the Railroad for the Norristown Branch. Freight branches are extended to the Plymouth Limekilns from Conshohocken and to a King of Prussia Quarry from Norristown. Campbellĺs poorly designed engines easily de-rail on grades and sharp curves. Mathias Baldwin produces more engines for the railroad, and steam engines fully replace horses on the Railroad. The Norristown Branch becomes double-tracked to facilitate high traffic.

1837-1840
Henry Croskey continues to purchase nearby land for his lumbering business and builds his new homestead on a hill above Green Tree Station. He is noted to have made vast improvements to the area and to have facilitated the Railroad, Turnpike and Waterway, consistent with Pennsylvaniaĺs Internal Improvement plan. Both the Coleman and Crawford stagecoach companies start transporting passengers from the Ridge Turnpike to Railroad stations on the Norristown Branch.

1842
The Philadelphia and Reading Railroad open passenger and freight service between Broad and Cherry Streets, in Philadelphia and Pottsville, PA, with a branch to Port Richmond, on the Delaware River, for coal transport. Their Main line runs along the West Bank of Schuylkill River, opposite to the Norristown Branch of Philadelphia, Germantown & Norristown Railroad.

1843
The Philadelphia, Germantown & Norristown Railroad combine freight and passenger services with the Philadelphia and Reading Railroad, with mutual access to the Delaware River docks at the foot of Noble Street, from the 9th and Green Street terminus. Henry Croskey opens a second business at the Railroad dock, utilizing the Railroad for lumber transport between Green Tree Station and the Delaware River. The Schuylkill Navigation Company loses revenue to the Railroads, which run from the Coal Regions in five hours, as opposed to the Navigation Company, taking six days.

1850
A freshet causes flooding from the Schuylkill River and the Flat Rock Bridge below Flat Rock Dam, between Lower Merion and the Schuylkill Turnpike, is destroyed. To facilitate travel close to the two points, a ferry is operated upstream between Rose Glen Station in Gladwyne, and Green Tree Station.

1853
Henry Croskey moves to Rittenhouse Square in Philadelphia, though his lumbering business is maintained in Roxborough. Mr. Croskey becomes a leader in planning for inter-city, public rail transportation.

1857
Henry Croskey sells Green Tree Station and grounds of approximately seven by ten perches, to the Philadelphia, Germantown & Norristown Railroad, for one dollar. He also sells his estate above Green Tree Station to Thomas Shaw, inventor, who would invent several permanent improvements for the Railroads. The University of Pennsylvania begins having boat races on the Schuylkill River, between Green Tree Station and Spring Mill, through to the early Twentieth Century. The Railroad builds a freight station across the tracks.

1870
The wealthy Philadelphia & Reading Railroad, who permanently leases the Philadelphia, Germantown & Norristown Railroad, absorb a financially troubled Schuylkill Navigation Company. Green Tree Station receives several upgrades to include; a tin, fireproof roof with remodeled chimneys, an addition to house a permanent Station resident, its central doorway & stairway are removed and replaced with a bay window, housing a telegraph. Windows facing its platform are converted into doorways, one of which for a waiting room. Scored concrete is painted white and its passenger platform roof replaced.

1873
With the Pennsylvania Railroad having a station in nearby Chester County, also named ôGreen Treeö, Green Tree Station in Philadelphia County, is changed to ôShawmontö, named after nearby resident and inventor, Thomas Shaw.

1874
Henry Croskey opens and is President of the horse-drawn Ridge Avenue Railway, operating from North Philadelphia into Roxborough and Barren Hill, which eventually becomes electrified in 1894. Thomas Shaw develops an inclined railway to travel between Manayunk and Roxborough, but it never materializes.

1912
The Philadelphia and Reading Railroad close passenger operations on the West Side of the Schuylkill River, below Bridgeport, and use that section exclusively for freight. The Norristown Branch is used for all local and express passenger trains between Philadelphiaĺs Reading Terminal and Reading/Pottsville/Willamsport, Lancaster/Harrisburg/Gettysburg/Shippensburg. The ferry between Rose Glen Station and Shawmont Station is closed.

1916
The last freight barge travels down the locks of the Schuylkill River, though the locks remain open for recreational use. 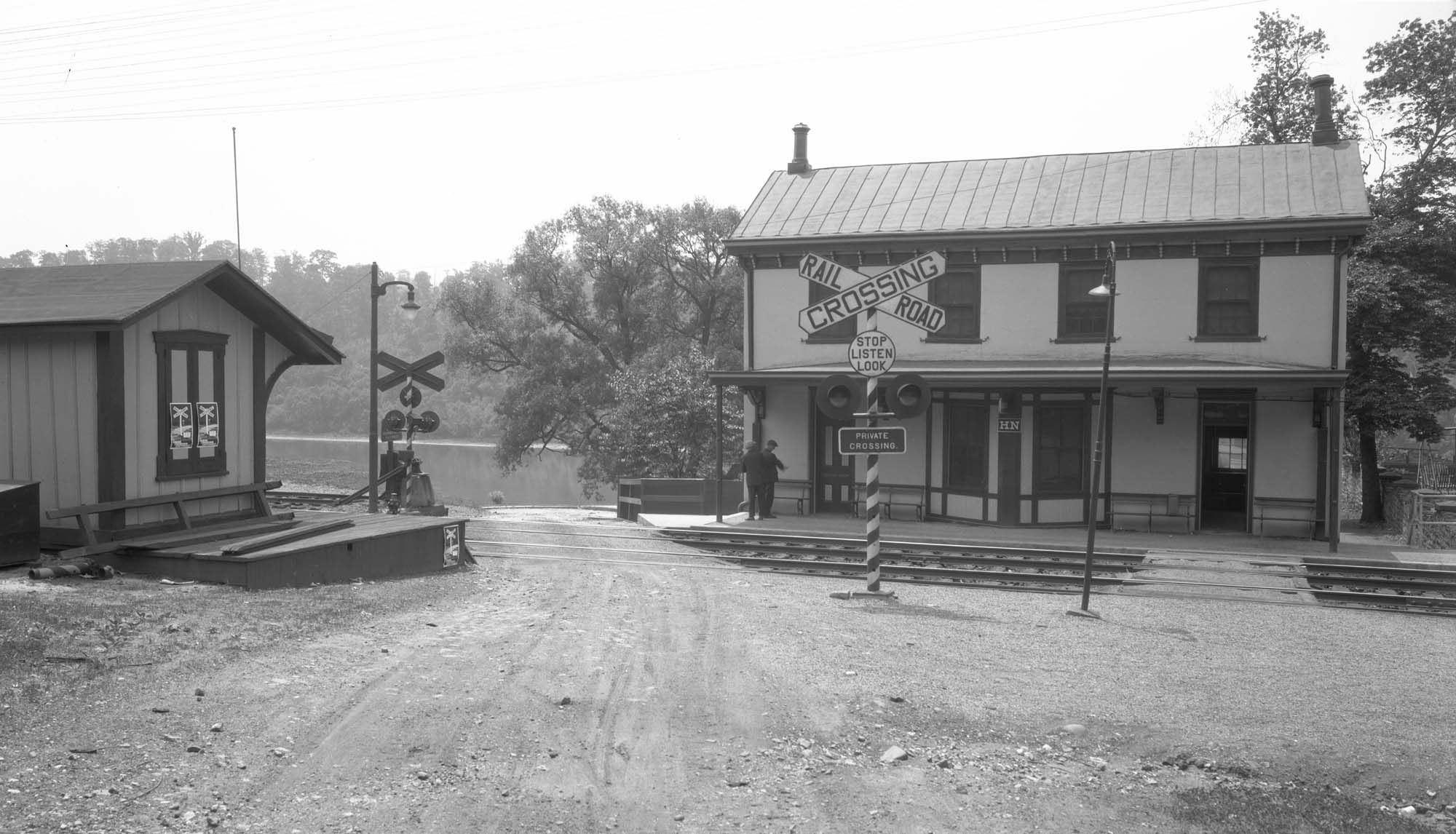 1929
The shutters on the windows of Shawmont Station are removed and put into storage. Scored concrete on front fašade is replaced with flat concrete.

1940
All locks along the Schuylkill River are closed. No recreational boating is permitted between Shawmont and East Falls.

1950
The Reading Railroad cuts backpassenger service from Williamsport to Shamokin.

1960
The Pennsylvania Railroad cuts back passenger service from Norristown to Manayunk. Their circa 1884 Shawmont Station is removed, though that line continues to carry freight.

1963
The Reading Railroad cuts passenger service to Shamokin and Harrisburg. Other than local commuter trains, the only express trains travelling Readingĺs Norristown Branch are to Reading and Pottsville.

1972
Though Hurricane Agnes causes flooding along much of the Schuylkill River, Shawmont Station is spared.

1979
SEPTA takes over Conrailĺs passenger operations and the Norristown Branch becomes the R6 line. SEPTA extends Pennsylvania Railroadĺs Schuylkill Branch ż mile to Ivy Ridge from Manayunk and tracks North of that completely close for freight service, following abandonment by Conrail. Abandoned tracks above Port Royal Avenue in Shawmont are paved over into a bike path to Valley Forge.

1983
SEPTA cuts back passenger service from Pottsville to Norristown.

1986
SEPTA cuts back Pennsylvania Railroadĺs Schuylkill Branch from Ivy Ridge to Cynwyd and a new Ivy Ridge Station is put on the R6 Norristown Branch, one mile south of Shawmont.

1991
Shawmont Station is no longer a scheduled stop, but a whistle stop. Its waiting room is closed.

1995
Shawmont Station is no longer a whistle stop, but remains occupied.

2008
Shawmont Station is placed on Philadelphiaĺs Register of Historic Places, as the oldest passenger railroad station in America.

2013
The last of the Brendelĺs descendants, move out of Shawmont Station, after occupying the Station for 104 years. SEPTA decides to have the Station restored and submits historical railroad documents to John Johnstone, Local Historian.

2014
Research and documents show that Shawmont Station, originated as an1826 country house, and is not only the oldest passenger railroad station in America, but also the oldest building owned by any railroad, in the World.

The Railroads | Click Here to Start at the Beginning